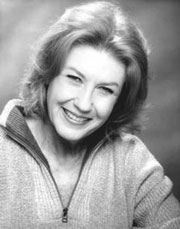 Carol trained for three years at the Central School of Speech and Drama in London and was one of the founders of the Drama Centre London, now considered one of the leading theatre schools in England. Returning to America, she joined the American Conservatory Theatre in San Francisco. She made her Broadway debut as Natasha in William Ball’s production of Chekhov’s Three Sisters. Other Broadway appearances include Oedipus Rex with John Cullum, First Monday in October with Jane Alexander and Henry Fonda, and The Suicide with Derek Jacobi. Off-Broadway she appeared in The Lady’s Not for Burning, Little Eyolf, and The Old Ones, among many others. Carol then went to Los Angeles with the award-winning television series, Fame, in which she played English teacher, Elizabeth Sherwood, for five years. She was asked by playwright Edward Albee to play Martha in his production of Who’s Afraid of Virginia Woolf, with which she toured the United States, Lithuania and Russia. Ms. Jenkins has worked extensively in Regional Theatre since her years in television. She played Mary Tyrone at the Denver Center Theatre, Marquise de Merteuil at the Cleveland Playhouse, Circe in Circe And Bravo at Wisdom Bridge Theatre in Chicago, Mrs. Higgins in Pygmalion at Seattle Rep., and various selections in Albee’s Women at the Old Globe Theatre. She has done four plays at San Jose Rep; Amy’s View, By the Bog of Cats (with Holly Hunter), Las Meninas, and Enchanted April. In Northern California she has played Arkadina in The Sea Gull, another Mrs. Graves in Enchanted April, and directed Private Lives.