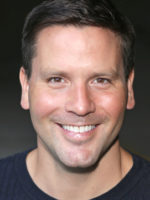 Based in New York City, Brian returned to the Clarence Brown as an Artist-In-Residence this semester while also teaching Graduate Movement for Actors at the University of Tennessee. Clarence Brown Theatre credits include: Three Sisters; South Pacific; The 39 Steps; Titus Andronicus; The Threepenny Opera; A Midsummer Night’s Dream; A Christmas Carol,; Monty Python’s Spamalot; and Noises Off. He also produced and performed the one-man-show I Am My Own Wife at the CBT’s Carousel Theatre in 2015. Other theater credits include the National and Japan tours of RENT, and regional productions of Altar Boyz, The Full Monty and Jesus Christ Superstar. His film and television credits include All My Children, Guiding Light, One Life to Live, and several independent features. Brian received his Master’s degree from UTK in 2016. He is a proud member of Actors’ Equity and SAG-AFTRA. www.BrianGligor.com